Learn the details of the winter frost laws, spring thaw laws and seasonal weight restrictions. Details for the USA and Canada by State/Province. Many areas incorporate temporary special weight limits and restrictions (frost or thaw laws) during the winter and spring months of the year. These temporary restrictions are usually referred to as “frost laws” or “thaw laws” and implemented typically during the month or March and April. In some Northern States and Provinces frost laws can still be in effect in July as it’s much colder in the North. Since these restrictions are implemented on a “as needed” basis it is possible many of the official government websites may not have published this temporary restriction in a convenient place as frost laws are also subject to change at any moment based on the temperature of the roads core. You want to be certain to check with the appropriate officials to verify the latest changes in the laws.

Why we have these laws and must protect our roads and highways.

In order to keep the trucking industry operating the Northern US states and Canadian provinces rely on engineers and scientific data to determine which dates frost laws will be in effect. With fairly recent advances in science and technology, data is much more reliable. This helps with the implementation of “Frost Laws” or “Seasonal Weight Restrictions” ensuring they are not implemented to early or late. While no State or Province desires to delay the transportation of goods through their territory it is imperative public assets are protected.

In areas that constantly get negative (ie: -10 below zero) temperatures the amount of damages has forced Northern US States as well as Canadian Provinces to create and enact laws that restrict vehicle weights during the spring and winter months (specifically trucking companies) when the roads and bridges are thawing out. There are all kinds of things that can go wrong with different types of roads and pavements. For example the State of Michigan has implemented permanent frost laws that go into effect during the months of March through May (and in some cases even June). Some routes require legal axle weight limits be decreased by as much as 35%. Some areas and local governments may also limit heavy-haul vehicle speeds to a maximum of 35 miles per hour during frost/thaw law months regardless of posted limits. 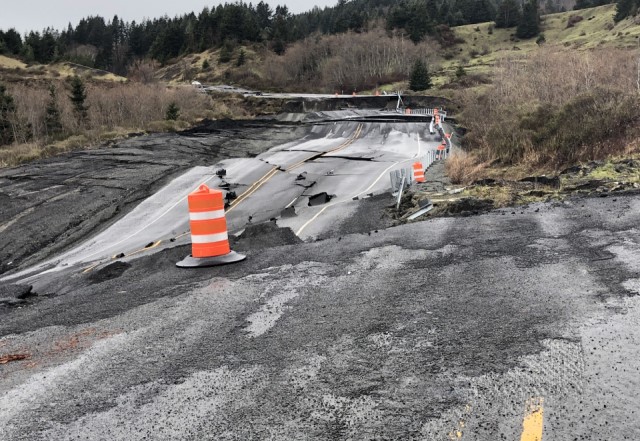 One of many examples is in Southern Oregon on old US Highway 1 (which follows the coast line from Mexico to Canada) the road is as much as 16 feet thick as years of pavement (even bricks) has been laid down year after year since the early 1900’s. It should be noted that today’s technology is able to provide us with roads that are flexible due to the engineering of the construction process and the materials used. Excessive weight exerted by overloaded axles (or a weakened supporting base) can cause the pavement to bend or deform. The strength of the road combined with its resistance to bending determines the amount of weight the roadway can handle.